Sky 1’s new comedy Rovers arrived last month to coincide with the hubbub surrounding Euro 2016. The premise is based in and around the clubhouse of local non-league side Redbridge Rovers.

The rest of the small cast is made up of well known actors such as Sue Johnston, and familiar faces like Diane Morgan and Steve Spiers; as well as relative newcomers Lolly Adefope and Jamie Demetriou who act out a mutual childlike crush throughout the series.

Cash’s directorial style is obvious, with Rovers reminiscent of his previous offerings The Royle Family, Early Doors and Sky 1’s The Café. Its simple mundanity and familiarity is comforting rather than outright hilarious. I found myself rooting for it after seeing the trailers and reading about it beforehand. However, for me the negatives unfortunately outweigh the positives.

Despite Cash’s obvious talent as a director, his acting isn’t the best. He gurns his way through the series like a rubber faced child, effecting a strange speech impediment that is quite bizarre. He inexplicably bellows out ‘Shite!’ at least three times per episode. (Ed – Maybe he’s describing the show?)

Why he decided to play the character as a 14 year old with Aspergers is beyond me? Other annoyances include the character Willie who writes the fanzine for Redbridge Rovers. Actor Pearce Quiggley does an irritating imitation of Adam Gillen’s character Liam in Benidorm. It is uncanny, put the two together they could be father and son. I hope it’s not intentional, cos any new comedy that uses Benidorm – a show so middle-of-the-road my Mum watches it – as an influence needs to take a serious look at itself.

There are some positives. Pete’s discomfort at his recently outed best friend’s displays of affection to his new boyfriend. The budding relationship between barmaid Sam and Tom is genuinely quite sweet.

Spiteful brothers Bruce and Lee played by the writers are gleefully nasty, but ultimately do not have enough screen time, which is a shame. I would have liked to see these two play a more central role and Cash take a back seat and concentrate more on directing. 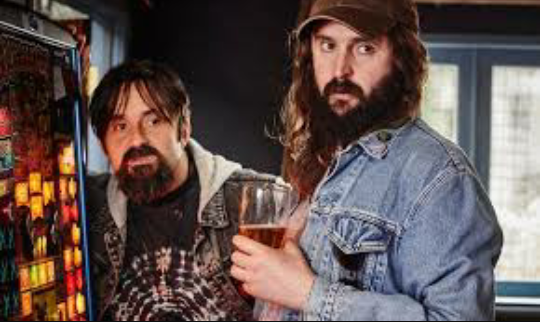 Rovers is easy watching, and will be very relatable to fans of non-league football. However, there isn’t enough laughs to be considered a comedy, which is what it seems to be aiming for. At the same time it is too daft to be a comedy drama.

Sadly, this leaves Rovers falling short of either, and overall, like Redbridge Rover’s season, leaves you feeling a tad disappointed.
__

Rovers is on Sky 1 at 10pm on Tuesday evenings.

Comedy, Must watch, Sky One