Corrie has given us far too many couples to cry along with or care about so I thought I’d write about a few of my faves. Because as cheesy as it sounds, isn’t life all about love…

Obviously, there were couples I have missed, but here are the five that automatically sprang to mind… 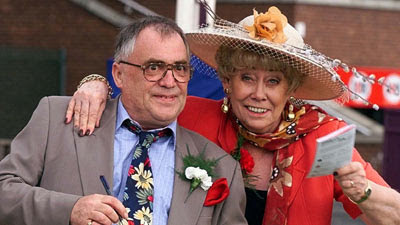 Let’s be honest, these two were like your grandparents. And when it comes to Coronation Street’s legendary pairings, who else could we start with?

The dynamic between these two was everything we wish for in a relationship; loyalty, love, respect. And a lorra laughs. Not only did they have to put up with the awful Terry as their offspring but they gave a home to so many of the past and present characters that they are basically the Mancunian equivalent of Battersea Dogs Home.

I think all of us ‘ship a pairing like Jack and Vera’s because whatever the hell happened you just knew that they were in it for the long haul. Whether he was pretending to ignore her, or she was moaning about his pigeons; there was an undeniable mutual love.Not to mention the amazing chemistry between Bill Tarmey and Liz Dawn.

You can’t buy that, no matter how hard you try.

Despite their obvious and many, many character faults, you couldn’t help but feel they were meant to be together. Leeanne was too dreary and wanted to change Peter, Nick(y) was too nice and sensible for Carla. Not to mention his Mother is Gail Platt – Tiger Mum extraordinaire. Frankly, I think Leeanne and Nick(y) are better off out of it.

Yes, I know he cheated on her on their wedding day. But hey, we ALL make mistakes and no matter how boring her personality was… Tina MacIntyre was a looker. Well, until Rob battered her over the head anyway.

I always felt like in spite of the cheating, the boozing and the pathological lying these two were a match made in Hell. Come on, even Devils need love too.

Tim and Sally Metcalfe (and Kev)

A bit left field I know, but I never thought the Corrie writers would manage to find a man to get Sally Webster to take that huge stick out of her BEEP! If Hyacinth Bucket had a daughter up north and left her down a ginnel, that would be Sally.

But somehow the writers have found Tim. Oh Tim, how we love you and your absurd eyebrows. Not only does he calm her down, make her see the error of her snooty ways, listen and counsel her daughter and drag her to the bedroom every time another resident gets married; he’s also BFF’s with her ex.

There may be times when you wonder if he loves Kev more than he does Sally, you can’t imagine her with anyone else but him now.

And so say all of us! 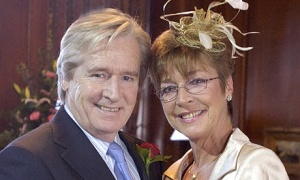 When you look at these two, you wonder why Peter and Tracey weren’t locked up in a padded room year’s ago.

Five kids between them and none are related to both of them. Then there are the weddings. Each married four times – twice to each other.

That’s before we even get to the affairs; off the top of my head, there was Dev Alahan, Mike Baldwin – several times -, Denise Osbourne, Wendy Crozier. (Ed – I’m tired!)

There is probably more but just like Deidre and Ken, we’ll choose to forget them and concentrate on the fact that no matter who else came on the scene, they always ended up back at number one together.

There’s love, there’s forgiveness, and then there’s Ken and Deirdre.

Let us know who your favourite Corrie couples have been in the comments below. I’m sure many of you disagree with me…