If an unfortunate accident were to occur, you’d probably want it to happen to Jean Claude Delcorps. He’s rude, overbearing, casually racist, startlingly cruel and overly sensitive. He makes sport of minimising and belittling his diffident wife in public.

A painful, protracted death would be sad in the way that all death is sad, but few would argue that the world would be a nicer place without him in it. 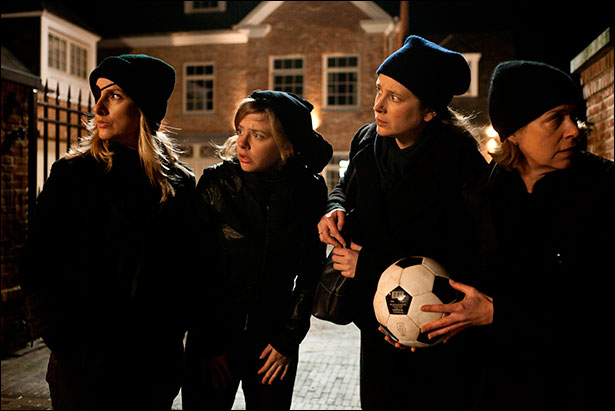 Bit harsh? You’re obviously not familiar with Nordic Noir; the strain of dark Scandinavian drama that came to prominence via The Killing, The Bridge and Borgen, made knitted sweaters must have items for about fifteen minutes, then retreated politely out of the spotlight as though it found the whole popularity business a bit distasteful and crass.

Happily, the genre thrives in obscurity and far from withering, it used the peace and quiet to evolve. The Out-Laws, initially released in 2012, has finally made it to TV and DVD in the UK, and having watched it effortlessly flex its considerable muscle across my screen, I can only conclude that HBO and other producers of mainstream drama are going to get their arses kicked across the playground if they don’t take a bit of private time in the gym.

The great thing about Nordic Noir in general is that it has high expectations of the viewer. Perhaps it’s a legacy of Netflix & Chill, or simply the habit of double screening we’ve been encouraged to embrace, but one doesn’t simply ‘watch’ Scandinavian drama; one is required to engage, pay attention, make mental notes and accept that confusion is part of the experience.

Not play Candy Crush, keep an eye on the football scores and watching a video of that cat falling off a sofa your mate posted on Facebook.

The Out-Laws assumes you’re doing none of these things. It assumes you’re watching five sisters preparing for a funeral with varying degrees of impassivity. That you’re paying close attention as two fairly inept men running their father’s insurance company are threatened with having their licence revoked in two weeks if they don’t sort their solvency issues out.

That no one’s grief seems particularly convincing, even as the vicar eulogises over the deceased, who lays in an open casket, apparently the victim of a bizarre accident that remains unreferenced but is suspicious enough for the insurance boys to pin their hopes on it.

At times, the Out-Laws refusal to sit still and divulge its secrets could be perceived as wilful. While flashbacks are a familiar device for filling in the details of an otherwise incomplete narrative, The Out-Laws toys with structural conceits to draw the viewer into its web. How did Jean Claude die? Was it an accident or by design? Is his wife complicit? What the hell happened to Birgit’s eye?

Your enjoyment of Nordic Noir is heavily dependent on your willingness to cede control to a third party and allow yourself to go along for the ride. The Out-Laws is dark, but exquisitely so, its casual swagger through territory that remains unmolested thrilling and dangerous. It revels and rolls in the folds of conscience we prefer to ignore, its characters’ weaknesses and vulnerabilities, far from concealed, are vivid and articulate the lapses of morality we all experience, but prefer not to acknowledge.

Maybe you like your binge TV to be bold, brash but ultimately easy to absorb as part of a predetermined multitasking regime you’ve honed to perfection. And that’s fine. There’s a ton of programming available for that very purpose and accessible without having to get off the sofa.

But there’s something to be said for committing. The investment may seem prohibitive initially, but once you’ve made the leap, the rewards are abundant and alluring.

A little guilt never hurt anyone.

THE OUT-LAWS is released on DVD on Monday 19th September by Nordic Noir & Beyond and available to stream on All 4.