I’ve scoured the papers, you know, and I can’t find any evidence whatsoever of the terrible crime that broke out in Cheshire’s beauty salons over recent months. Not a single news agency -British or international – is carrying the story of how a gang of renegade lunatics liberated a box of scrubs from the Biffa bin outside a hospital and, disguised as medical professionals, injected melted car tyres into the faces of several women in the local area.

Incredible really, given that the effects of these assaults to the person weren’t limited to facial paralysis and dribbling, but also compromised their proximity to the real world, self-awareness and standards of behaviour that generally preclude 42-year-old women with a reasonable vocabulary from calling one another ‘currant head’ because they have a mole on their face.

Le sigh. If only this were true. That all this was simply the result of a crime. A terrible crime, it’s true, but nonetheless an isolated incident we can all put behind us after a suitable period of mourning.

But as other incarnations of this franchise prove, Cheshire is not the only locale afflicted by the lavishly monied losing their grip on reality. New York, Miami, Atlanta, New Jersey; the list is long, comprehensive and could cause one to lose faith in humanity if examined too closely.

If you’re not acquainted with this motley crew of footballers wives, fashion designers and… well, the indefinable Ampika, I urge you to watch the first two episodes now. For your awe at the mountainous sense of entitlement on display and grief that this is where evolution has brought us can only be assuaged by watching Tanya Bardsley – wife of Phil, Stoke City defender – hijack her own jewellery launch by announcing her pregnancy. 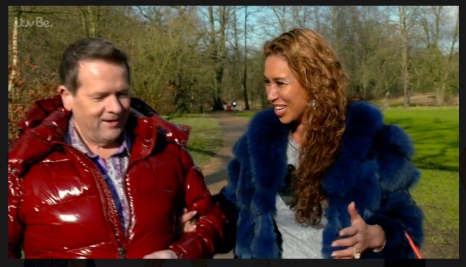 By watching the aforementioned Ampika wobble through the park with ex-husband Mark and trying to work out which one of them will be engulfed by their personal crisis first.

I’m telling you now, people. This is a world where footballers are both the voice of reason and moral compass. It’s as horrendous and hilarious as you might imagine.

Meet you back here next week, so we can talk about episode 3. I’ll be the one in the see through beach dress.

I TV Be, Reality TV