How long can this go on for?

This question occurred to me at some point during the third episode of Series 12 of Geordie Shore and I’ll be honest with you, distracted me from the rest of the ‘action’ and the night’s sleep I felt I deserved.

Because, let’s face it, it could go on forever.

The convention of new characters replacing those too old/knackered/cirrosis ridden to contribute anything meaningful to the nightclub scene around Newcastle and beyond is now accepted, even if it was a little daunting in the first place. Concerns that there might be an insufficient supply of lobotomised but friendly shaggers and Botox-ed to the point of explosion kids willing to perform biological functions on camera in the North East of England have been assuaged.

Indeed, in Chloe Ferry we may have a new strain of reality TV star altogether;  a scientific experiment currently being conducted by a world that inexplicably wants to see what happens  if you expose a young woman to Kardashian culture for the entirety of her teenage years. Early results suggest she’ll spend most of her time facedown on the floor of Tup Tup Palace with her g-string in the air, complaining about Scotty T’s lack of interest in her and crying into a startlingly green beverage.

I hope to god Germaine Greer never sees this. 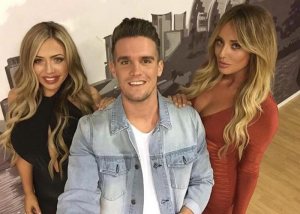 At the other end of the hot tub, Charlotte Crosby, Gary Beadle and Holly Hagan have all been with the show since the first series and show no signs of getting tired of a lifestyle that at 20, would be barely manageable. At 25? Put it this way, if they’re not all on dialysis by now, it’s only a matter of time.

Charlotte and Gary are the lynch pins of the show and it’s hard not to feel fond of them as they blunder about looking for the answers to the same existential questions that troubled Sartre and De Beauvoir almost a century ago. What is life? How drunk is it possible to get without the police becoming involved? When will they get over themselves and go out with each other properly so we can all get on with our lives?

It’ll happen. And reassuringly, we have the television formats to deal with it. While Geordie Shore continues to terrorise the region’s alcohol reserves, Gary and Charlotte will embark on the next phase of being famous for having nice hair; their own version of Newlyweds (Newcastlyweds?), survive an unfortunate misunderstanding over a can of tuna and eventually separate, which will in turn generate two further shows following their lives after the inevitable divorce.

Charlotte will end up shouting on Loose Women while Gary goes on I’m A Celebrity, Get Me Out of Here and falls in love with Katie Price.

And then you wonder why I can’t sleep? I hope to god someone stages an intervention before any of this happens. On me or them.

I’ve got to the point where either is tempting…

Geordie Shore is on MTV at 10pm on Tuesday nights.